To aid accessibility and speed up access to the most essential Kee functionality, you can use a keyboard shortcut rather than moving and clicking your mouse.

The following table shows the default key combinations that can trigger each feature.

Upgrading from earlier versions of Kee

If you have previously customised the keyboard shortcuts in your browser, some or all may be retained in Kee 3.6. If you disabled a shortcut, it may or may not be re-enabled. We don’t know how every version of every browser will handle this situation. As such, it is entirely possible that you will end up with some of the shortcuts defined above, and some old “Ctrl+Shift+[number]” shortcuts.

It is impossible to offer default key combinations which work for every combination of web browser, operating system and language. With the addition of other browser extensions that offer their own key shortcuts, there is an increasing chance that you will come across a conflict involving one or more of the default shortcuts listed above.

Since every computer setup is different and we cannot know your personal preference, you must manually choose how you want to adjust your setup to avoid these conflicts. Depending upon why you experience a conflict, there are many potential ways to resolve them.

Some of these require restarting your browser. We don’t know which, and it probably varies across operating systems so if you try something below and it doesn’t work straight away, restart your browser before moving onto the next idea.

Changing the assigned shortcut for Kee or another browser extension

Your browser should provide a way for you to adjust the shortcuts used by Kee and other extensions. Here’s the process for Mozilla Firefox and you can do it by copying and pasting this link into a new tab in Google Chrome: chrome://extensions/shortcuts

The ancient menu bar that has been redundant for decades is still part of Firefox and with the Alt + Shift shortcut keys you may accidentally come across it.

Banish it from your life as follows:

In Firefox you can either set this for all websites or on individual pages. We don’t know how or if it is possible in Google Chrome and other browsers.

For individual pages you’ll need to adjust the site’s permissions using the usual dialog for this. At the time of writing it looks a bit like this: 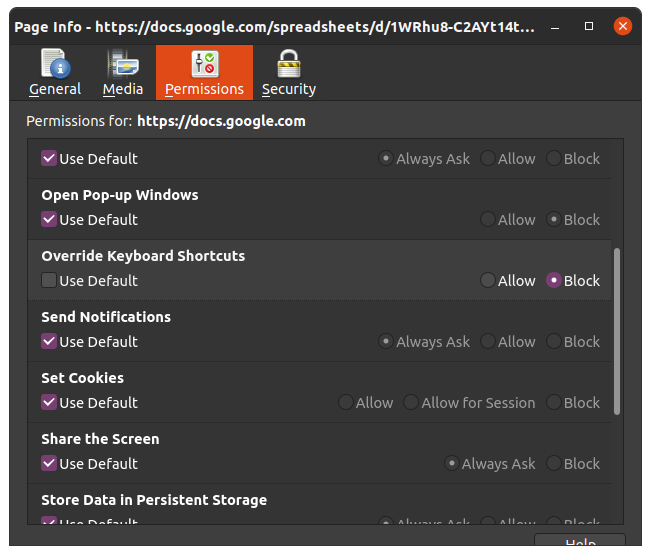 For all websites you need to edit an advanced setting as follows:

This only disables accesskey modifiers so has no effect on most modern web pages and therefore the approach above is likely to be of more use.

Some of the most common conflicts are listed below to help people searching for answers to specific problems but it is far from complete. In all cases, the information above will allow you to resolve the conflict for your situation.

Conflicts in Firefox in other locales can be explored by hacking the relevant locale code into this URL and searching for the top-level accesskey properties: https://hg.mozilla.org/l10n-central/de/file/tip/browser/browser/menubar.ftl

This documentation applies only from Kee version 3.6 onwards. Before that version, we had a subtly different set of features available via keyboard shortcuts and utilised as many as 6 number keys along with Ctrl+Shift. For example, Ctrl+Shift+1 would open the main Kee popup.

I selected these numbers because they were unused at the time (roughly 2011) and allowed a logical ordering of the shortcuts that matched the order of the features on the main KeeFox toolbar. A number of reasons have arisen in recent years which mean that those old keyboard shortcuts were no longer a good choice for most people:

There is the additional long-standing drawback of these key shortcuts that they are relatively challenging to perform quickly - with the lower numbers in particular requiring either some highly dexterous finger movements on the left hand or moving the right hand the longest possible distance to press the number key. Given this and all of the more recent drawbacks, the time has come to change the shortcuts.

The new shortcuts are approximately half as likely to conflict compared to the old ones and I hope that the additional documentation and advice above will mean that everyone will be able to configure the shortcuts to their preference, which of course may include reverting back to the old version 3.5 behaviour if that old muscle memory is just too hard to retrain.

For the record, I considered a lot of alternatives and undertook a lengthy investigation into the current prevalence of each potential shortcut combination. A couple of the potential modifiers are discussed below:

A post was merged into an existing topic: How to disable shortcuts?