KeePassRPC no compatible with the upcoming KeePass version 2.42

Thanks for the heads up.

Dominik contacted me to let me know too and I see he has already made a change to ensure backwards compatibility with KeePassRPC so there’s nothing we need to do.

I’ve previously thoroughly tested 2.42 and found no problems. I’ve now tested with the latest 2.42 snapshot in case any other last minute changes have caused a problem and it all looks good so far. I’ll post an update in the unlikely event that any issues are found but assume that no news is good news.

Hello, same for me here : 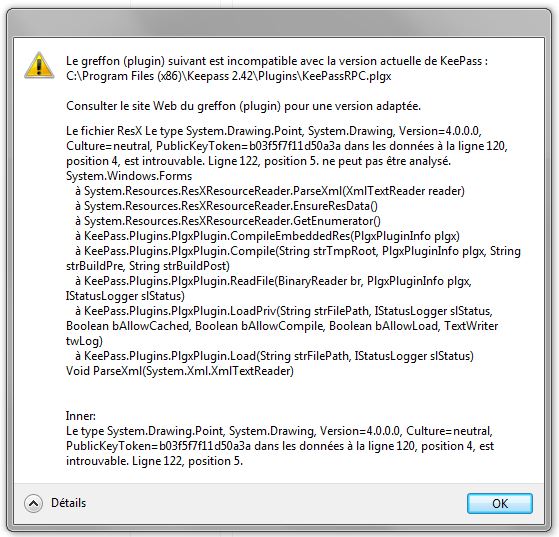 I don’t understand the error message but regardless there are only two broad causes for this:

First of all: Hello everywhere!

While everything was perfectly fine with v2.42.1, KeePass reports incompatibility with KeePassRPC and KeeCloud and refuses to load them.

Major issue, as Firefox integration (using Kee) and synchronizing via DropBox is not possible without them …

Thanks a lot in advance!

My problem with KeePass 2.43 and Chrome Kee Extension 3.2.7 is that Kee does not connect to KeePass after restarting the browser.

If I reinstall the extension and authorize again it is reconnected again but after restart no connection.

As I spent a lot of time on this specific issue - it might be an idea to document it.
This issue is caused by some protection that blocked some DLLs or the compiler. (SRP - AppLocker - GPO - Antivirus) The PLGX uses a subfolder in the %temp% folder and in the %localAppData%\KeePass\PluginCache\ folder.
So the KeePass PLGX files work is they are compiled every run at start. The trick is to catch the compiled files and drop those in the plugin dir:

What I did to solve this:

Now the built DLLs are in the plugins folder, it’s more compatible with strong protections + no need to rebuild them every run. This needs to be redone once every new release.