confirmed flaky under windows, too.

[The Problem from an user standpoint]:

the big mf problem is it disrupt the workflow

you have to crash all your tabs and windows and restart everything because
and you can not do anything apparently.

confirmed that under high security this s**t happens

Kee - from the UI side - does not “get” that keepass2 is still running and with a valid open db.

On the contrary, keepass2 received req from an app called “Kee” to issue new code.

Please, make Kee bulletproof, so that we can put that code to the window as necessary without disrupting our precious workflow

I am seeing the same thing.

It seems to happen most often if KeePass exits then restarts without Firefox restarting.
When KeePass starts, the OFF icon will change from red to amber, so the plugin knows that KeePass is running, it just can’t tell that the database is unlocked.

Closing Firefox completely and reopening will usually clear the problem. I have also found that disabling/enabling the plugin will sometimes clear the problem without having to close Firefox.

Workaround (so you do not have to disrupt your productivity workflow even more;

Workaround for a serious bug - Kee not opening code field window (although Keepass2 reports that Kee asked for it and issued new code);

-When Keepass display a code - deny access.
that will trigger another code reissue, and hopefully Kee will be able to catch it up this time and open the code entry window.

Kee doesn’t work, just showing “OFF” logo and message “You are not logged in to your password database”, but I am logged. KeePass enabled, connection between keepass and kee established.
Windows 10
KeePass: 2.37
Kee: 2.0.0.25
Firefox: 57.0 (64 bit) 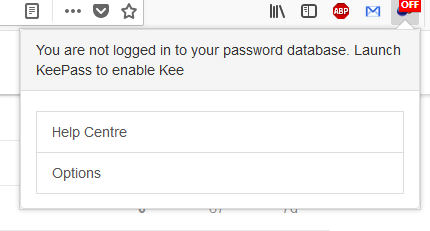 have you figured out a solution?

Hello,
since the upgrade to the newest firefox (57) my kee / keefox is not working. Keepass is startet and the database is loaded. Now I get a big red OFF with the message, that I didn’t opened a database.
My System: Windows 10 64Bit, Firefox 57

Does somebody have a solution?

I’ve just added a new documentation page containing updated troubleshooting information, including advice on how to resolve the problems discussed in this thread.

Complete the getting started tutorial first if you can. Pay special attention to any troubleshooting advice displayed at the top of the page. For some problems, this can at least give you a clue about the type of problem that is preventing Kee from behaving the way you expect. Once the basics are working, going through the contents of the tutorial will ensure you understand the basic features of Kee. If the tutorial does not work for you or does not answer your specific question, the troubles…

There was nothing in my troubleshooting guide (v2.38) about this issue I checked. Issue remains kee reports “Big Red OFF” despite being logged into keepass Any assistance with this would be appreciated.

Also had similar problem of Kee not being able to connect to KeePass and I just resolved it. So Iam sharing how I fixed it.

In my case it was another addon issue.
I was running discontinued RequestPolicy 0.5.28.1-signed.1-signed (https://addons.mozilla.org/en-US/firefox/addon/requestpolicy/). I had no idea that this version was discontinued (installed it some time ago).

And even though I read all the troubleshooting tips which mention to whitelist things in other addons, which I did in every possible addon I have.
Whitelisting it in the outdated RequestPolicy wouldnt help at all .
Installing “RequestPolicy Continued” (https://addons.mozilla.org/en-US/firefox/addon/requestpolicy-continued/) would simply resolve the issue.
Think the new RequestPolicy did read the whitelisted items from the old version, so whitelisting might also be needed.
(Whitelist: Allow 127.0.0.1:12546)

Anyways I first had to find out if its actually addon causing this, and if yes then which one.
Good way (IMO) seems to be simply disabling all addons and trying Kee.
If it works, enable some of your disabled addons and check again. If it works, enable more and check again, until it stops working, then you have much narrower choice of problematic addons.
If it doesnt work with addons disabled, its most definitely not an addon causing it.

I can see you guys here seem to all have Firefox 57.x so you might have another issue and this might be completely useless.
But thought I throw this out there, especially because RequestPolicy is mentioned in troubleshooting along with what to do, yet I still stumbled into such situation, which might make you first assume that RequestPolicy is not at fault after whitelisting. ( surprise, surprise xD )

Good luck ya all

I’m using Kee on Windows 10 with Comodo Internet Security Premium 10. I’ve had a number of issues using Kee to access a different password database within the Virtual Desktop sandbox. As a result I now run two separate instances: one a normal installation and one a portable version for use in the sandbox.

But when there is an upgrade, despite carefully clearing the sandbox, updating both versions and checking that all the ports are correct, I still sometimes encounter this red OFF logo problem. When all else fails to clear it, I usually find that what works is to close Firefox, open the tray on Kee, select Tools/KeePassRPC (Keefox) Options/Authorised Clients and revoke all existing authorisations. Next time I try to connect, I’m asked for the authorisation code. I then have to find this (sometimes the window is hidden by other stuff), and enter it. After that, all seems to work well till the next update. I find it very time-consuming and annoying, though, and would love to find an easier way of doing this.

I’ve no place to login.

I’ve that above the applet : “You are not logged in to your password database. Launch KeePass to enable Kee”

So what can I do to resolve this problem?

Update, to mine running windows 10 pro 64 bit in firefox 58.0.1 64 bit and any previous version of same the RPC plugin was missing in my INSTALL directory in the plugins folder a simple download later and voila’ works perfect.

Special thanks to Luckyrat fur bein awsome and all the community, much appreciated

I have the same problem. Is there an easy fix?

I’ve this issue too. I’m using Windows 10 and Firefox v58 and KeePass v2.38. Sometimes it is working, but when it is showing the OFF logo I’ve to close KeePass and Firefox and start both afterwards.

Moving from Windows 7 to Feren Linux (an ubuntu variant). Installed Kee with Firefox and Keepass 2 with terminal. Kee does not see keepass2 and only gives me the ability to open the Kee vault. When I open keepass2 with terminal then kee suddenly shows it is connected to keepass2 and it all works just fine (after entering the code for the connection). Even the kee firefox popup displays the open keepass button. Then when I exit terminal Keepass is terminated and the kee logo turns to the big red off and the open keepass button disappears from the popup. Please tell me what or where to complete the connection between the two programs. I really do not want to have to recreate all those passwords.

Well I had the same problem.
Kee would open the keepass database, but not load passwords and show a yellow or red off.
Inside Keepass2 I somewhere had an option “set as Kee homegroup”.
After I did that, everything was fine.

This turned out to be the solution for me as well: go into my KeePass DB, select the top level folder, right-click it, and choose “Set as Kee home group”.

i find my solution for this bug.

I had deleted the main folder in keepass.
so I had to select a new folder for kee.
right button on a folder, click “set as kee home group”