Hello, thanks for your work with this addon.
I was able to get it to work on my 1 laptop, then on my desktop the icon just says OFF in red. and it tells me to login to keepass, but I’m logged into keepass 2.37 and rpc 1.7.3

I restart firefox or keepass but same thing happens.

EDIT: Still an issue on Firefox developer edition 58.0b1.

for me it works fine on Developer Edition 57.0B11 & just updated to B12 and still works.

I’m experiencing a similar issue. If I debug the extension, I can see a long stream of the following messages:

An attempt to setup the KPRPC secure channel has failed. It will not be retried for at least 10 seconds. If you see this message regularly and are not sure why, please ask on the help forum. Technical detail about the problem follows: TypeError: configManager.current.KPRPCStoredKeys is undefined

I’m guessing it’s a problem converting from v1 of the config.

Before, my config,keeConfigPage0 object was missing the KPRPCStoredKeys key. That seemed to be causing issues.

I managed to fix it by clearing the data by opening up the extension debug console and running browser.storage.local.clear()

Thank you @xobs that fixed my issue.

The next release will have a fix so that this missing KPRPCStoredKeys config key doesn’t cause this problem.

Your workaround is good in the mean time, although obviously wipes out all other Kee configuration at the same time so for anyone else reading this, you might prefer to wait a day or so for Kee 2.0 Beta 1.

Thanks for your work. looks like Version 2.0.0.20b2 fixed the issue

Excellent. Thanks for the feedback.

2.0.0.20b2 on Firefox Quantum 58.0b2 still has sort of a similar issue.
I do get a pop-up with the authorization code and a pop-up that (I think) should have the form to enter the code but it’s blank 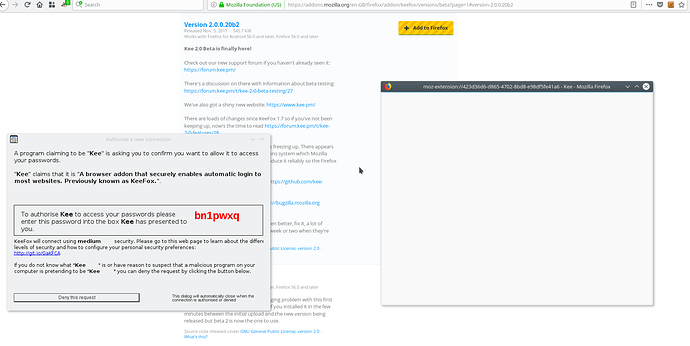 That’s not quite the same issue. In any case, it’s already fixed in Beta 5 - https://addons.mozilla.org/en-US/firefox/addon/keefox/versions/2.0.0.23b5

Indeed fixed, not sure why I installed 20, must be that I forgot I scrolled down :))

I updated keepass to 2.37 as well and when I launch keepass it says the plugin is incompatible

I’m a bit confused before always the rpc plugin version matched the FF addon version.
Is this no longer true? will 1.7.3 rpc plugin work with keepass 2.37 and Kee 2.x.25???

I had just make a soft link from the proper .mozilla extension directory to the keepass plugin directory but now as I root around in .mozilla I no longer see the RPC plugin as part of

Update - by grabbing a copy of 1.7.3 plugin from github and placing it in keepass plugins directory 2.x.25 is now working. Still would like to know the new relationship between kee 2+ and the rpc plugin going forward.