Failure to save login details for some sites

My name is Ciprian and i just seek help for some sites that i can not save logins whatever I do.
My setup is Keepass (local database encrypted with key) + RPC plugin latest version + kee extension latest + Firefox latest version
I have keepass autofilling all my logins and works great always except a few sites:

Those are just a few, I will offer any assistance needed just to solve this.

Thanks in advance,
Ciprian

I’m working on some improvements for Kee v3.1 this week. Since there’s a small chance this will affect these sites, I will investigate them after doing that work.

Unfortunately, Mozilla prevent add-ons from working on accounts.firefox.com so it is not possible to log in to that website using a password manager extension like Kee. Auto-type is one option but failing that you’d just have to copy/paste.

I will wait your updates with very much interest.

There were a few issues with this site. First, it has dozens of invisible form fields and no valid form to contain them. Kee 3.0 and lower will therefore ignore the form because it looks like a complex configuration page rather than a sign-in form.

I’ve got over that first hurdle by increasing the maximum number of form fields allowed (which is feasible now due to other improvements in Kee 3.1). That enables form saving

You’ll need to type your credentials correctly the first time though, or refresh the page between failed sign-in attempts (see this GitHub issue for more details)

The number and configuration of the invisible form fields seems to be unpredictable so:

I’ve applied a lot of improvements to the relevant parts of Kee, which I think will make a difference on a variety of websites. Unfortunately it’s probably still not enough for this website to work perfectly, although you might be able to hack around with the form fields stored in the KeePass entry if you’re really bothered by it.

The good news is that Kee now matches entries for the form. The limitation is that it won’t auto-fill (it just looks too likely that it is not a sign-in form). It’s unlikely we can adjust this behaviour without breaking many other websites but I might have a go at it in a future Kee version, once the latest batch of changes have had some months to settle.

Compounding this limitation, it also looks like the page does something unusual that causes the Kee icon to be removed from the field after it’s been added initially. No idea what that could be but I suspect I can develop a workaround for it one day, especially if we ever find other websites with the same quirk. In the mean time, it shouldn’t stop you from using Kee on the page via the usual Ctrl-Shift-2 or Matched Logins button. It also only has this weird behaviour during the initial page load so switching between tabs will create the icon as expected.

This looks fun too. I don’t remember seeing any website like this before, although it’s somewhat reminiscent of login forms from around 15 years ago in that it at least superficially appears to be taking steps to actively prevent form filling operations from succeeding. It might just be a bug in their website, either that or it’s been designed by someone with some outdated ideas of internet security. I must say I’m pretty confused about why they are storing entered usernames and passwords in some sort of local storage - again, I’ve never seen that before.

I’ll need more time to look into whether there is anything that can be done to enable auto-fill on this site in 3.2+; saving appears to be working fine using Kee 3.1 - I’m not sure if that was a problem before or not.

All in all, I’d be a bit concerned if I was putting sensitive data into that site so you might want to consider an alternative supplier/service (I have no idea what it does or whether the fact it stores entered passwords until one manually clears local storage is a concern for that use case, although I struggle to imagine any scenario in which that’s not a security flaw in the site design)

You mentioned this was just 3 of the examples you have so it would be good to hear of other examples and whether they’re fixed with version 3.1.

I will test and report back my results.

Another sites that does not seem to save login or fill is my Home Assistant login, unfortunately i can not provide a site for that because is always a local network login under the form of http://192.168.0.xx:port-here/ or http://homeassistant.local:port-here/. I’ll try to attache a picture. Unfortunate i can not provide the code. I tried to copy it but it is endless. Maybe I can provide you some day with secure teamviewer so you can see the site.

I want to Thank you very much for your work and about my.enel.ro you are totally wright :)) a bunch of amateurs

No worry about that site. 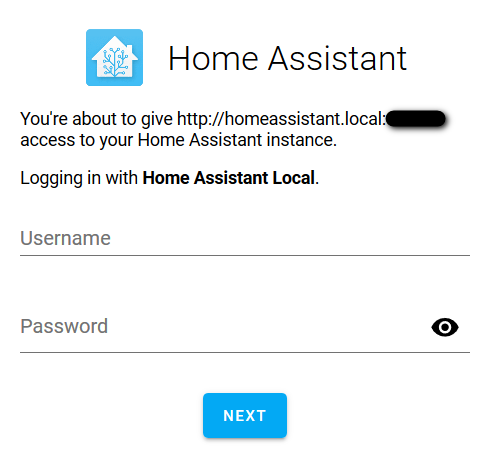 This is how Home Assistant login looks, sry i forgot in the latest post to upload the image.

P.S. I want to test the new Firefox addon unfortunately I do not know how to install it on my Firefox, is not signed and my Firefox seems to refuse to install it under any circumstances. If not now when you release it I’ll test everything we spoke here.