in the old KeeFox plugin when saving a new password the folder structure of the KeePass database was shown where you had to select the folder in which the new entry should be created.

In the new Kee plugin you only see the flat list of folders and not the folder structure: 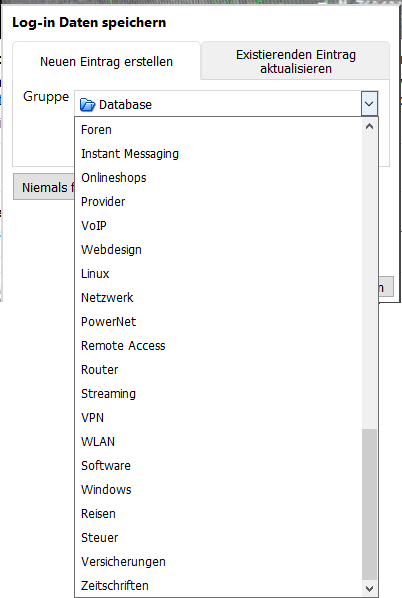 My feature request would be that you can see here the folder structure of your KeePass database ideally with the folder icons.

Yeah I agree that would be nice. I had to remove that feature because it didn’t work cross-browser after Firefox removed support for the more powerful but Firefox-specific drop-down feature. I can’t recall which browsers supported the feature now, nor to what extent but I know it was too limited in comparison to what was possible with the old add-ons system before Firefox 57.

Hopefully browsers will catch up one day; failing that, I’ll probably rewrite the whole dialog in a year or two so that a drop-down is no longer required.

Thanks for the feedback.

Just wondering if any browser progress had been made that might allow a folder view to return to Kee again at some point?

Yes but only in my personal development version of Kee, and it is still some way from being ready for release. Hopefully I’ll be able to get a beta version released within a month or two and we can see where we go from there.